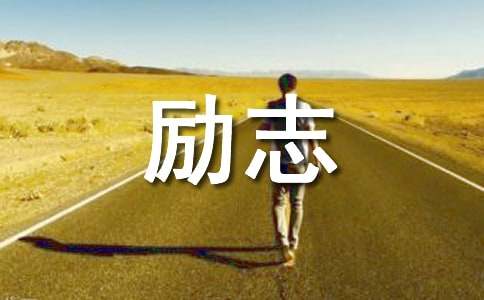 An elderly carpenter was ready to retire. He told his employer (contractor) of his plans to leave the house building business and live a more leisurely life with his wife enjoying his extended family. He would miss the paycheck, but he needed to retire. They could get by.

The contractor was sorry to see his good worker go and asked if he could build just one more house as a personal favor. The carpenter said yes, but in time it was easy to see that his heart was not in his work. He resorted to shoddy workmanship and usedinferior materials. It was an unfortunate way to end his career.

When the carpenter finished his work and the builder came to inspect the house, the contractor handed the front-door key to the carpenter. "This is your house," he said, "my gift to you."

What a shock! What a shame! If he had only known he was building his own house, he would have done it all so differently. Now he had to live in the home he had built none too well.

So it is with us. We build our lives in a distracted way, reacting rather than acting, willing to put up less than the best. At important points we do not give the job our best effort. Then with a shock we look at the situation we have created and find that we are now living in the house we have built. If we had realized, we would have done it differently.

Think of yourself as the carpenter. Think about your house. Each day you hammer a nail, place a board, or erect a wall. Build wisely. It is the only life you will ever build. Even if you live it for only one day more, that day deserves to be lived graciously and withdignity. The plaque on the wall says, "Life is a do-it-yourself project."

A man had a little daughter―an only and much-loved child. He lived for her―she was his life. So when she became ill， he became like a man possessed， moving heaven and earth to bring about her restoration to health.

His best efforts， however， proved unavailing and the child died. The father became a bitter recluse， shutting himself away from his many friends and refusing every activity that might restore his poise and bring him back to his normal self. But one night he had a dream.

He was in heaven， witnessing a grand pageant of all the little child angels. They were marching in a line passing by the Great White Throne. Every white-robed angelic child carried a candle. He noticed that one child‘s candle was not lighted. Then he saw that the child with the dark candle was his own little girl. Rushing to her， he seized her in his arms， caressed her tenderly， and then asked， “How is it， darling， that your candle alone is unlighted?” “Daddy， they often relight it， but your tears always put it out.”

Just then he awoke from his dream. The lesson was crystal clear， and its effects were immediate. From that hour on he was not a recluse， but mingled freely and cheerfully with his former friends and associates. No longer would his darling‘s candle be extinguished by his useless tears.