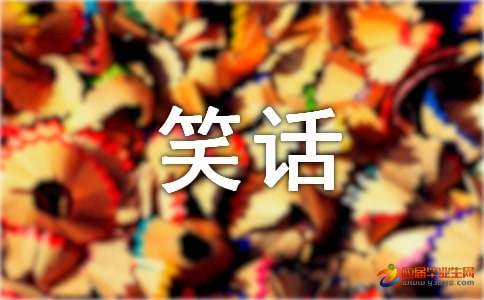 A judge asked our group of potential jurors whether anyone should be excused, and one man raised his hand.

一位法官问我们这群修补陪审员是否有人应当免权。一个人举起了手。"I can't hear out of my left ear," the man told the judge.

“我的左耳听不见。”那人告诉法官。"Can you hear out of your right ear?" the judge asked. The man nodded his head.

“你的右边耳朵听得见吗?”法官问道。那人点了点头。"You'll be allowed to serve on the jury," the judge declared. "We only listen to one side of the case at a time."

The suspicious-looking man drove up to the border, where he was greeted by a sentry. When the guard looked in the trunk, he was surprised to find six sacks bulging at the seams.

"Take them out," the guard instructed. "I want to check them."

Obliging, the man removed the bags, and sure enough, each one of them contained nothing but dirt. Reluctantly, the guard let him go.

A week later the man came back, and once again, the sentry looked in the truck.

"What's in the bags this time?" he asked.

Not believing him, the guard checked the sacks and, once again, he found nothing but soil.

The same thing happened every week for six months, and it finally became so frustrating to the guard that he quit and became a bartender.

Then one night, the suspicious-looking fellow happened to stop by for a drink. Hurrying over to him, the former guard said, "Listen, pal, drinks are on the house tonight if you'll do me a favor: Just tell me what the hell you were smuggling all that time."

Grinning broadly, the man leaned close to the bartender's ear and whispered, "Cars."

It was Christmas and the judge was in a benevolent mood as he questioned the prisoner. "What are you charged with?" he asked.

"That's no offense," replied the judge, "How early were you doing this shopping?"

"Before the store opened," countered the prisoner.